A couple of weeks ago, I missed out on my early morning run. I decided to instead go for a run in the afternoon, taking my usual companions of iPhone, arm strap for the phone (with headphones of course), and our Siberian Husky.

Already I was experiencing what I believe is amazing technology; listening to a live feed of music from across the country (Triple J), tracking my coordinates, calories, pace, time & distance (with voice feedback using RunKeeper), while controlling this from a white button on a small wire of my headphones. 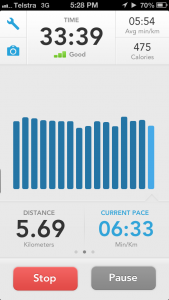 Side note: Just this week, Pebble (the crowd funded) watch in partnership with Runkeeper, added the ability to track your Pace, Time and Distance from your Pebble Watch. So for $150 (cost of the watch), I could have taken this to a different level.

At the time of starting my run, there was still a few phone calls I had to make for work. Instead of making these calls before running, I decided to make these calls during running – ie. Extreme Multitasking.

Using Siri, I successfully called 3 work colleagues, paused/played my music, created two reminders for the following day, and even managed to send a text message (just for the fun of it). All of this was achieved without the need to touch my phone’s screen, using only my headphone controls. 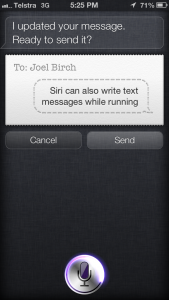 In summary, here is a list of what I achieved: