The Illusion of Balance

I was lucky enough to recently travel to Singapore to attend the Learning 2.013 conference, hosted by United World College, South East Asia.  I have attended conferences in the past but this was a an entirely new level for me.  I was surrounded by amazing educators and the  conversations were inspiring and exciting.  Many of the people whose company I now shared were previously only known to me as avatars on twitter or educational blog sites.  If everyone wasn’t so incredibly awesome and genuinely friendly, I may have found myself a star-struck mess huddled in the corner.

Upon arriving at Singapore, I purchased a SIM card to put into my phone so that I could stay in touch without paying high roaming charges. (I learned this lesson the hard way, some time ago!)  Unfortunately, this new SIM didn’t agree with my particular combination of phone and service provider, so I had to resort to only using services on my phone that worked through WiFi… when I was within free WiFi range.  This arrangement served me well, for the most part.  The conference and the hotel both had WiFi but I found myself at a loss when in between those places.  I would reach for my phone and then remember that it was of no use to me.

This was an interesting experience for me.  I don’t live my entire life behind a screen.  I can talk face-to-face just as easily as via twitter, email, or web forum.  I am just as happy cycling as I am playing XBOX.  I get information and inspiration from the physical and digital world around me, in vaguely equal parts.  I like to think that I am generally pretty good at knowing when is the right time to engage with technology.  The problem in this case, I found, was that the choice of whether to engage or not was taken away from me.

Conversations that begun over coffee in the morning needed to be resumed.  I could do that through twitter, if I had the internet.  The session I attended about remixing video files was incredible; I’d love to be able to check the website to view some of the other resources that were offered to me.  A bunch of us are going out for chilli crab (why wouldn’t you?) but I can’t take part in that conversation until I get back to the hotel.  (It’s OK, they didn’t leave without me). 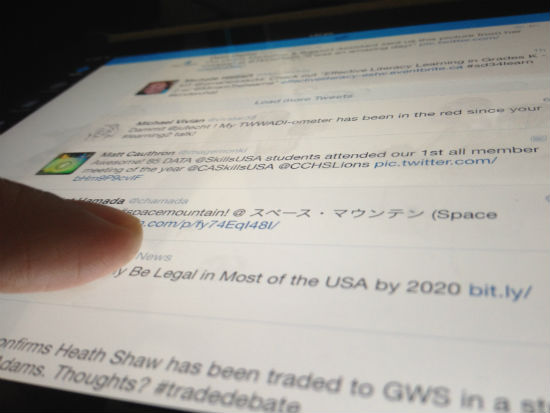 This whole experience made me think more about ‘balance’.  We are often told that, to attain balance, we need to unplug/switch off/reduce our screen time.  The irony was that I felt more unbalanced when I was deprived of my screen time.  “But that just means that you are dependant on your technology” I hear you say.  I’m not so sure about that.  Even if I were to go for a ride, I would use my phone to listen to music, and use the Strava app to map my ride.  If I were talking face to face, I would possibly want to share photos, or record someone’s contact details on my phone.  Technology has become the tool that enables so many aspects of my life to flow together.

If the conference organisers and host had denied me access to technology, I would have been in all sorts of trouble.  Given that technology is such a part of my life, I think I would have had trouble engaging to the extent that I did.  I used my iPad to write notes.  By using my Evernote app, I can retrieve conference notes from any of my devices.  I followed twitter hashtags on Hootsuite at different stages of the day.  This allowed me to get an idea of what other learning was going on around me.  I logged into discussion tools such as TodaysMeet as an alternative to traditional classroom talks.

Perhaps, as an adult, I could have found a way to make the most of my time at Learning2, even if I had no access to technology.  I am sure that I would struggle to maintain a certain level of engagement over a long enough timeline, however.  I was fortunate to be exposed to super-engaging content at every stage of this conference.  We were also allowed, trusted, and encouraged/expected to engage with our ‘classmates’ through face-to-face and digital means.

At several points I found myself sympathizing with a typical Australian school student.  Imagine sitting in a room in which I am not permitted to talk to my friends.  The only ‘conversation’ comes from the front of the room, and the opportunities to respond are few and far between.  I find it difficult to link what I am hearing with the outside world.  I hear a string of facts but can’t put them in context.  I have been guilty of some, if not all of these ‘classroom management techniques’ in the past.

So what do we do?  Give every student a tablet, internet access, and lift all bans on internet access?  No.  A move like that is likely to serve to strengthen the myth that students use technology irresponsibly.  But opportunities to communicate, and an engaging task, are an absolute must.  Communication need not be digital, initially, but should be structured to foster mutual respect and encourage input from all so that the gradual introduction of new digital tools doesn’t serve as a disruption.

It has been said, many times, that teachers can continue to be great teachers in the absence of technology.  The catch is, students may be finding it more and more difficult to be great students without technology, and they have had several years to practise their skills before we get to them.  The conversation prism offers a snapshot of the ways our students are choosing to communicate.

Our audience is changing.  I think it’s time we tweak our story a little.