I wanted to share a recent experience I had with Twitter.  I am a relatively new convert to Twitter and have managed to gain a lot of amazing information from it.  This is one of the first times I reached out to someone in my network for help.  I was not disappointed.

I use MindNode on my iPad  for so many things.  I especially use it for planning workshops and collecting and arranging my thoughts.  I recently found that I had a lot of mindmaps saved on my iPad that were not named correctly, but I couldn’t work out how to rename them.  I did a quick google search but nothing jumped out at me so I tweeted the developers.

By using @mindnode in my tweet, I was actively addressing the developers, so I knew someone at MindNode would ultimately read my tweet, although this does not guarantee a reply.  By using the #ios hashtag, I was drawing on any other twitter users that just happened to be browsing twitter for matters regarding IOS devices.  From memory, I tweeted this early one afternoon.  MindNode is based in Austria, so I shouldn’t have expected an immediate reply, given the time difference.  Nevertheless, I got a reply within a couple of hours.

The response was quicker than I anticipated and told me exactly what I needed to know.  The solution to my problem was actually pretty straight forward, I was obviously just looking in the wrong place.  I was pretty impressed.  Twitter just bridged the gap between Australia and Austria, between me and a developer, and did it quickly, for free!
The developers must have sensed that I had just been looking in the wrong place, so they followed up: 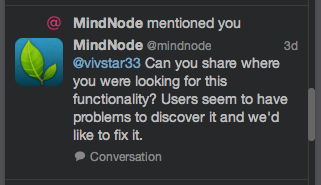 This tweet was directed straight at me, asking where I looked for the function.  I replied, telling them that I thought the most logical place would be in the “Edit” menu, but I did not find what I was looking for.
And then: 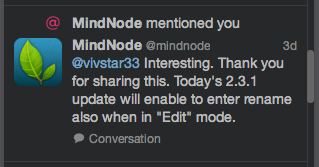 Now, I can’t claim that my Tweet directly prompted an update of the app, but the direct contact with the developers was invaluable for me.  It may have also been useful for MindNode developers as well, as they were given a bit of insight into how users navigate their apps.

For any other teachers out there who think twitter is “not for you” I ask you this: What other tool simultaneously gives you direct access to specific users, and likeminded individuals you don’t know, at a global level?